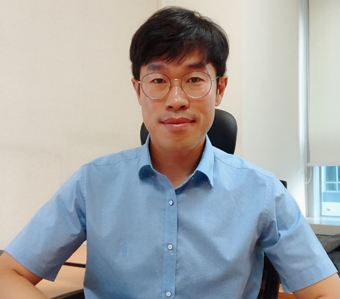 Professor Jinwook LEE was appointed at the Sungkyun Advanced Institute of Nano Technology (SAINT) this September after working as a researcher at UCLA’s department of material engineering for 3 years. He finished both undergraduate and graduate program in Sungkyunkwan University.

Professor LEE is working on energy converting solar battery and light-emitting diode that converts electric energy to light. Ultimately, he aims to develop an electronic device that can efficiently create and use energy.

Producing and using electric energy efficiently is an important task for the society, economy and environment. The energy that we use in our daily lives are mostly from fossil fuels such as coal, oil and natural gas which are limited in quantity and environmentally-unfriendly. By using solar batteries, we can use the sunlight to produce energy without worrying about the environment and depletion. However, the silicon solar batteries were comparatively expensive and could not replace fossil fuels.

Professor LEE is developing a new type of solar battery that can replace the expensive silicon battery. Efficient use of the electric energy is also important. If we can use less energy to produce light in our daily day, we can use the energy resources for a longer period. The light-emitting diode that Prof. LEE is developing is relevant to this.

He was very active in extracurricular activities when he was an undergraduate student. He joined a “Taekgyeon” (Korean martial-art) club named “nokdujanggun”. He did not miss a day to exercise in front of the library after classes. Thanks to his athletic senses, he became a lead trainer of the club and won awards in tournaments. He expressed that he was able to research tirelessly thanks to the health that he gained through regular training.

Prof. LEE also expressed his respect toward his mentor, “Professor Namkyu PARK is my teacher and a role model. From him I learned the ethics and passions of a researcher and also the proper way to live as a human being.”

“I love to research. My dream was to live and die in a research lab”

Professor Jinwook LEE quoted Professor Namkyu PARK and expressed his will to follow his footsteps. “Professor PARK told me that his goal is to win a Nobel Prize. It’s amazing to see him endeavor and get closer to his goal. I wish to become a researcher and a teacher like him.”

He finished all his degree in Sungkyunkwan University. When he was asked whether he ever thought of studying abroad, he answered that he did during his senior year of undergraduate program. However, after a thorough research he discovered that Korea was one of the top in the particular field of research. Professor Namkyu PARK, who is an eminent scholar in this field was in SKKU at the time and Prof. LEE decided to study at SKKU.

He realized that the research environment and quality in Korea does not fall behind America or Europe after finishing his research program at UCLA.

“I think SKKU has an excellent system and infrastructure for student success in comparison to other institutions in Korea. I did not have to worry about tuition because I received scholarship throughout my 4-year long undergraduate program and I became part of the nation-run 'global doctorate fellowship' research program. I continued to receive support from the university when I was working as a post-doc researcher in America.”

When he was asked what he wants to do in the future, he said that he wants to conduct many researches that will help the society. He wishes to see his students become excellent researchers in that process.

Finally, professor Jinwook LEE wanted to encourage the students. “There may be times when you are frustrated but if you continue to walk the path, you will be rewarded in an unimaginable way.”