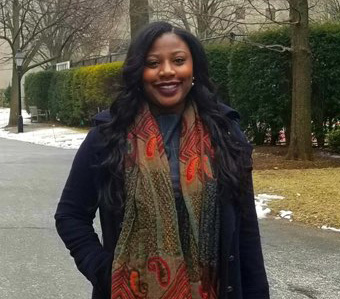 Nikia Brown, an African-American student at Sungkyunkwan University, got a job on Feb. 26 as a head of the Global and Intercultural Learning Program Team at the University of Illinois at Urbana-Champaign. “I'm very excited about this opportunity and I'm looking forward to making meaningful programs for students and universities in the future,” said Nikia.

▶What is the role of the head of the Global and Intercultural Education Program?

She will start working from March 23rd this year. There are three major tasks:

2) Promote programs to colleges and promising partners on campus

▶Interest in culture continues from childhood...

Because she was raised in the U.S. in African and Caribbean families, she has been interested in cultural diversity since she was young. She came to Korea after graduating from her undergraduate school with a chance to teach English for a year in Korea. When I asked her why she stayed in Korea for another year, she smiled and said, “I'm into Korean culture and people.”

When she returned to the United States two years later, she was a completely different person. She said, “My curiosity about different cultures around the world has deepened, and I want to fill the gap between people from different cultures and backgrounds." Immediately she started looking for graduate programs in sociology and learned about scholarship programs run by the Korean government. She received a scholarship from the South Korean government in 2010 and was able to earn a master's degree in sociology from Sungkyunkwan University in 2014.

She returned to the United States and took another master's degree at the Intercultural and International Communication of American University in Washington, D.C. Nikia proudly said, “As a developing international administrative officer, I want to work hard to make a society where individuals can live their own different lives and be recognized.”

Q. What did you learn in your master's degree at Sungkyunkwan University?

A: I studied sociology at Sungkyunkwan University and in the course of my research, I focused particularly on multicultural families living in Korea. In the paper, I address how children from multicultural families establish their identity in different cultures. In fact, when conducting a qualitative study of eleven high school students from multicultural families, all participants mentioned their experience of being discriminated against because of their foreign identity, and said they had felt negative views about them from Korean people. The participants wanted to be considered the same by their peers. The study showed that a multicultural integration policy is not enough to help children adapt to Korea. After returning to the U.S., she developed her research with Professor Koo Jung-woo of Sungkyunkwan University's sociology department into a paper which was published in the Journal of Sungkyunkwan, an East Asian journal. This is one of my proudest achievements, and it would not have been possible without the lessons I learned in Korea from my mentors and colleagues who supported me.

Q. How did you get to know about the job?

*Listserv: A service on the internet that provides emails to subscribers (subscribers) of similar interests.

Q. Why did you choose the job?

A: I had no doubt that this opportunity would be the culmination of a research process at Sungkyunkwan University and American University in terms of providing an independent platform to bring about change through what I enjoy most (developing leadership skills of young adults and building mutually beneficial relationships among people from different backgrounds).

Q. How many stages did the interview take in total?

A: The interview has a total of three stages. The first stage was asked to submit a four page project-based cultural lecture plan for foreign and domestic sophomore students. The second stage was a half-hour telephone interview, and the final stage was a four-hour face-to-face interview on campus. I interviewed three people in charge during the first hour. Then there was a 30 minutes question-and-answer session after giving a pilot lecture. Next, I had an interview with the vice dean of the College of Literature and Science, and I had lunch with the management and a tour of the campus.

Q. What was the most difficult thing about preparing for the interview?

A: The interview process was complicated and very competitive. The most difficult part was that the presentation time was limited to 30 minutes and there was too much information I wanted to share. We had to use the time wisely and emphasize the most important aspects. The presentation included participation activities, so I had to ensure how long it would take and the link between those activities and the key topics of the presentation. The preparation process was not easy, but it taught me valuable skills such as resilience, professionalism, and consistency. I feel grateful for everything I have learned and overcome because each experience has made me better.

Q. If there is anything you want to say to Sungkyunkwan University students?

A: KEEP GOING! Life is not a straight-line journey and sometimes things may not go as you expect them to. However, regardless of the situation, it is very important to maintain a sound view of life. Failure and frustration do not end in themselves. They are opportunities to make ourselves stronger and more motivated. Try to build a relationship with a mentor who cares and understands you so that you can receive support and encouragement when you need guidance. Finally, believe in yourself, even if no one does. I hope that you don’t have trouble falling short of other people's expectations in order to create the future you want.