Chung Lang (Blue Wave) is a student club that inherits the old tradition of Sungkyunkwan Confucian scholars which were called Yusaeng in the Joseon Dynasty. Chung Lang aims to create a unique campus culture by organizing various events that interpret traditional elements of the old Sungkyunkwan in a modern way so that all SKKU students can enjoy and take great pride in the history of the University.

Chung Lang studies the history of the old Confucian scholars and revives some of the old Sungkyunkwan ceremonies and events based on historical records with a modern touch. 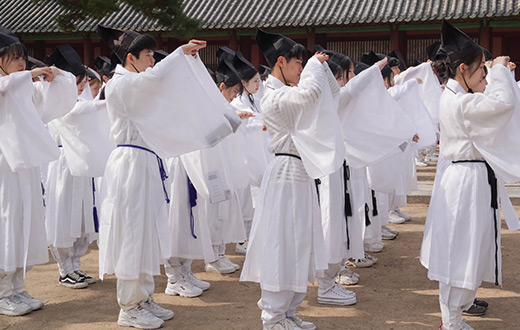 Shin Bhang Rye
Shin Bhang Rye was a rite of passage and welcome event for all newly admitted Yusaeng who passed the national exam at Sungkyunkwan in the Joseon Dynasty. According to history, Shin Bhang Rye was organized by senior Yusaeng. The freshmen were given team tasks, and shared food and snacks with the senior students.

Chung Lang brought back Shin Bhang Rye based on old Sunkyunkwan's history in a modern and creative way. Chung Lang’s Shin Bhang Rye is held every year in early March and begins with an official matriculation ceremony where freshmen visit Munmyo, the shrine of the great Confucian scholars, in traditional costumes. Afterward, participants share food and snacks, play quiz games, and join various programs created by Chung Lang to help freshmen learn about Sungkyunkwan's history. At the end of the event, all of the students are given souvenirs, a certificate, and Hopae, personal identifications used in the Joseon Dynasty. 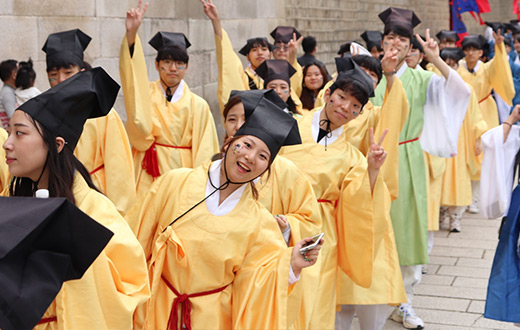 Gohanora
Goharona came from Yuso, an event that was organized by Yusaeng in the Joseon Dynasty. Yuso means ‘Confucian scholars’ petition to the King’. In the Joseon Dynasty, students at Sungkyunkwan, or Yusaeng, were considered future elite officials, and they held a meeting and wrote a joint petition to the King. After all Yusaeng students signed the petition, they marched to the King’s Palace to deliver their proposals. The Joseon history says Yusaeng’s rights to petition were protected by the King.

Chung Lang’s Gohanora also inherits this tradition. On the day of Gohanora in September, all participants wear traditional Yusaeng costumes and gather at Myeongnyundang, the old college building. From there they march to Gwanghwamun, where the King’s Palace is located. Participants sing and dance to songs created by Chung Lang during the Gohanora parade. They also discuss a proposal selected from a contest and deliver it to an invited government official.